To break the Caesar cipher you can just shift all the letters in the ciphertext 3 places to the left.

If you want to make it more secure you could adjust the shift value from 3 to a secret value that only you and the recipent of the message know, i.e creating a secret-key.

The Vigenère cipher surfaced around the 1600, 1500 years after the Ceasar cipher. Its similar to the Caesar cipher, but instead of a fixed value of the shift, the shift value is determined by a key.

So as we can see, the Vigenère is far more advanced than the Caesar cipher due the fact that the shift value is constantly changing. But there are a couple of problems here: - If the key is shorter than the plaintext we might start to se repeating patterns, and can start guess the length of the key. Picture the key 'BCB', which gives shift values of '2,3,2', and plaintext 'SOS HELP ME SOS'.

The pattern 'TQT' repeats at interval of 9, which we can use to assume the keylength is 9, or a value divisible by 9, i.e 3. 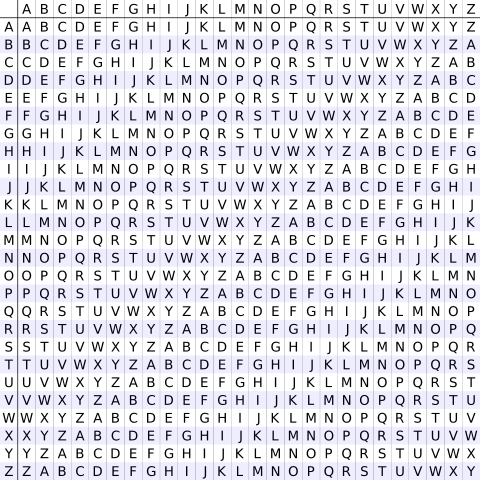 How ciphers work - The permutation

Permutation is a function that transforms a letter, or set of bits, in such a way that each letter has a unique reverse. In the example of the Ceasar cipher the permutation is the shift of 3. It is also essentials that each permutation itself is unique: We can not have a cipher where both letter 'A' and 'B' is substituted with to 'D' because then we will not be able to decrypt the ciphertext.

To be secure a permutation should satisfy some criteria:

How ciphers work - The mode of operation

Mode of operation is an algorithm that uses a permutation to process a message of random length. In the example of the Cesar cipher, the mode of operation is to repeat the same shift of 3 permutation for each letter in the message. A cipher's mode of operation can mitigate the problem that we get when multiple occurenses of a letter in the plaintext get revealed in the ciphertext (thus make us vulnerable to frequency analysis), like the Caesar cipher (3-shift) example where 'HELLO' is encrypted to 'KHOOR'. The mode of operation of the Vigenère partially defeats this, and if the keylength is equal to the length of the plaintext we can make frequency analysis difficult.

To get a feeling of how it works I have created a python snippet that can be used to encrypt/decrypt Caesar cipher texts.

When the code above is run it will output the following: